If you are scaling a recipe up or down or if you are trying to calculate calories, you may need to know how many teaspoons are in a cup.

Although this is not as common a question as how many teaspoons equal a tablespoon, it is still something many home chefs need to know.

What is a Teaspoon?

A teaspoon (used in cooking or baking) is a unit of volume.  It can be measured in imperial, United States customary, or metric units.

The United States uses different units than our English speaking friends from countries such as the United Kingdom, Canada, and Australia.

Here is the breakdown:

It can be difficult to follow a recipe from one country while using measuring spoons and cups from another country.  So be aware of the recipe’s origin and the unit measurements you are using.

All of the recipes on The Tasty Tip are based on the United States standard units.

The most common abbreviation of teaspoon is tsp.  However, some people abbreviate teaspoon as t, ts, or tspn.

Although these abbreviations are used less often, being aware of them will help you if you run across them in a recipe.

The most common abbreviation for tablespoon is tbsp.  It can also be abbreviated as T, Tb, Tbs, or Tbls.

It can be confusing to distinguish abbreviations between teaspoons and tablespoons if you are used to seeing them written one way and then you run across a different abbreviation.

Needless to say, I ruined my dinner rolls by adding too much salt.

I don’t want any of my readers to be confused about the measurements.  On The Tasty Tip, I always spell out “teaspoon” or “tablespoon” in my recipes, so all of my readers are sure of the correct measurement.

How Many Teaspoons in One Cup

There are 48 teaspoons in one cup.

Volume is the measure of space occupied by object.  Remember calculating volume in high school algebra? You calculate volume by multiplying length, width, and height.

When you measure ingredients with measuring spoons or cups, you are measuring volume.

To achieve precision, measure dry ingredients (like flour) by weight.  Read more about how to eliminate baking disasters with a simple kitchen scale.

Ingredients such as salt, leaveners, and spices are often added to a recipe in small amounts.

It is usually acceptable to measure these ingredients with measuring spoons instead of weighing them. Because they are added to recipes in such small amounts, being less precise seldom affects the recipe outcome.

Most home kitchens do not have a scale with the precision to weigh teaspoons and smaller amounts.  Using measuring spoons is your best option.

However, if you scale the recipe up by a significant amount, you will find that weighing these ingredients will be beneficial.

Are you confused by the terms level teaspoon, rounded teaspoon, and heaping teaspoon? If so, read on to see each term defined.

How many teaspoons of sugar are in a cup?

There are 48 teaspoons of sugar in a cup.

How many teaspoons are in a dry cup?

There are 48 teaspoons in a dry cup.

How many teaspoons of flour are in a cup?

There are 48 teaspoons of flour in a cup. For more precise flour measurements in a recipe, weigh the flour with a kitchen scale. 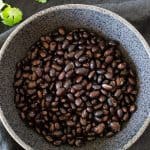 How to Cook Black Beans: So Easy You Can Whip Some Up Every Week

How to Cook Bacon in the Oven: Best Techniques for Crisp or Chewy Bacon

I was so tired on inconsistent results when I cook

Celebrate the end of pumpkin season with vegan Pum