Learn how to make Sour Cream Enchiladas with cooked chicken, a homemade smooth green chili sour cream sauce, Monterey Jack cheese, and flour tortillas.  With easy prep the night before, this recipe comes together quickly at dinner time.  Double the recipe and freeze the leftovers for a convenient freezer meal.

Looking for more dinner ideas?  Check out the best chicken recipes to make for dinner.

Time Saving Tip: Cook the chicken ahead of time.

Roll the ingredients together in a flour tortilla and drizzle Green Chili Sour Cream Sauce and cheese on top.  Bake in the oven until sauce is bubbly.  Serve with guacamole, salsa, green onions, or roasted corn.

Corn or Flour Tortillas in Enchiladas? 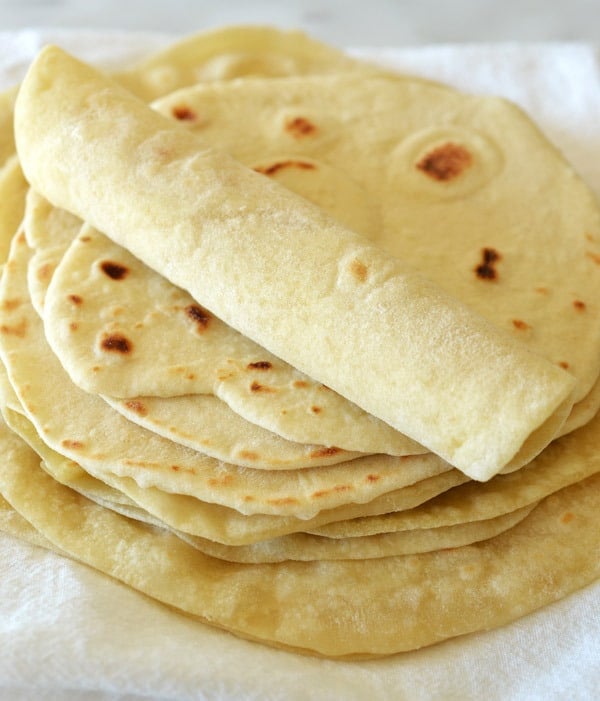 Early Spaniards introduced and began growing wheat in Mexico.  Today 40% of the wheat grown in Mexico is grown in Sonora, Mexico (located on the United States/Mexico border).  Because of the wheat commodity, the people in Sonora began making flour tortillas instead of corn tortillas.  Flour tortillas migrated north of the border because flour is cheap and tortillas keep and ship well.

As the sour cream chicken enchilada recipe migrated to the United States, more adaptations were made.  Sour cream replaced crema.  Canned chilies replaced fresh chili peppers.  But the most tragic adaptation came when condensed soup was used to make the sour cream sauce.

However, condensed soups are not as nutritious as foods made without additives.  In addition to additives, such as monosodium glutamate, flavoring (very nonspecific), soy protein isolate (beware soy food allergy), and sodium phosphate, condensed soups have a large amount of sodium and fat.

How to Make Healthier, But Still Quick and Easy Sour Cream Enchiladas

You know that eating whole foods and avoiding preservatives whenever possible is a healthier choice.  That is why relying on condensed soup in a creamy chicken enchilada recipe is alarming. 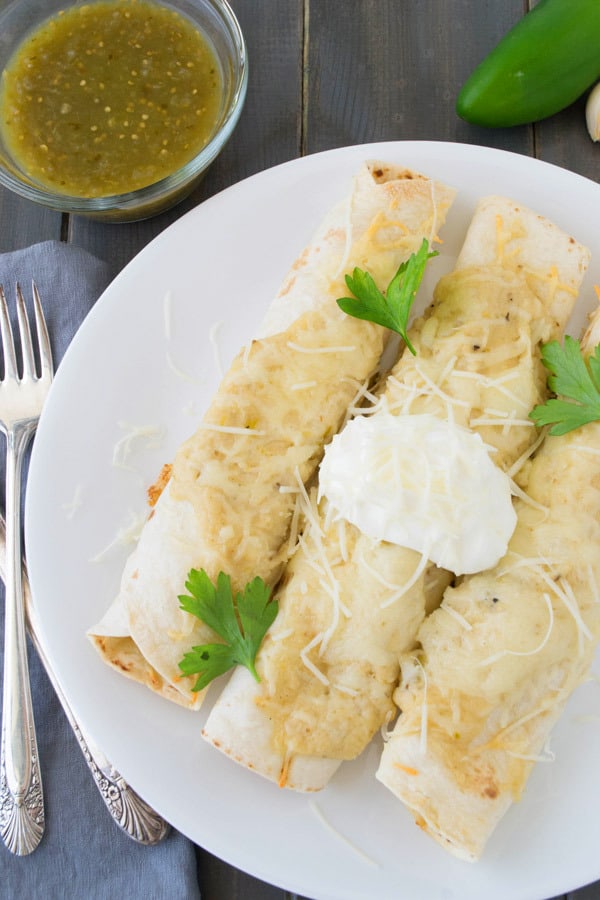 My mission: make a healthier, but still quick and easy sour cream enchilada recipe.  Making a real sour cream sauce was the key.

Now, I promised easy chicken enchiladas, and that is what you will find in my recipe.  Creamy chicken enchiladas are easy to make, even without using condensed soup.  It takes just over 10 minutes to make a delicious thick and creamy sour cream sauce that tastes better than any recipe using condensed soup.  Sour cream sauce can be made ahead of time and stored in the refrigerator for a few days until you are ready to use it.

This sour cream chicken enchilada recipe calls for Green Chili Sour Cream Sauce and flour tortillas.  You will find that this creamy enchilada recipe reminds you of what you may have eaten growing up, but it will taste a lot better than any condensed soup recipe you have tried.  Best of all, it will not have preservatives, additives, or other unnecessary ingredients, best avoided in your diet.

Save time and energy at dinner time by doing some or all of this prep work earlier.  Do it either the night before, or in the morning before you head off to work.  You will never regret prepping ahead of time.  Dinner will be on the table more quickly, with the least amount of energy.

If you prep the night before, store all of the prepped ingredients separately, either in an airtight container or in a zip top plastic bag.  Don’t forget to label your food.

Start the Sour Cream Sauce with a roux.  A roux is the base for a thick and creamy sauce. 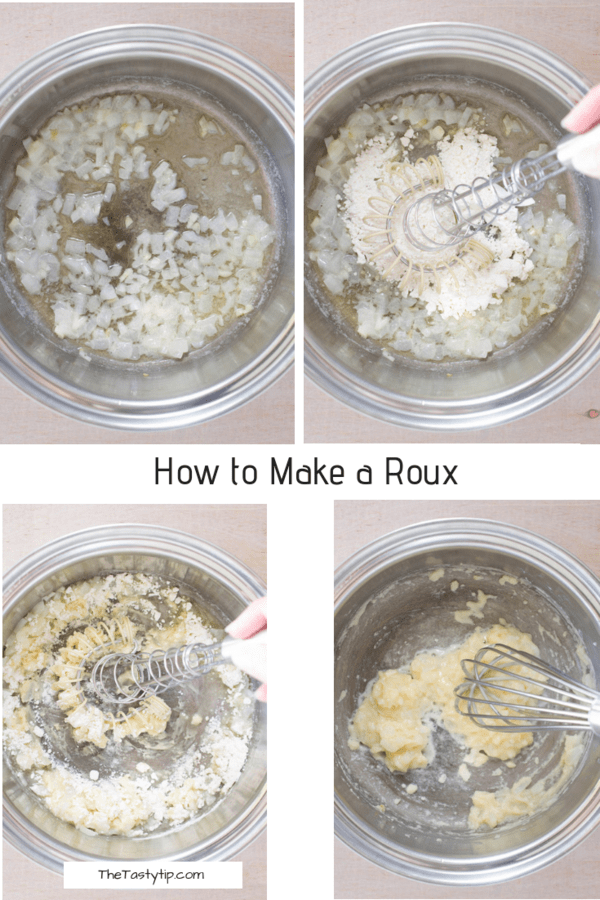 6.  Add the remaining chicken broth and whisk until the sauce is smooth and thick, about 5 minutes.  Remove from heat and let cool for two minutes, so the sour cream won’t curdle when it is added to the pan.

7. Whisk in the sour cream and continue to whisk until smooth and creamy. 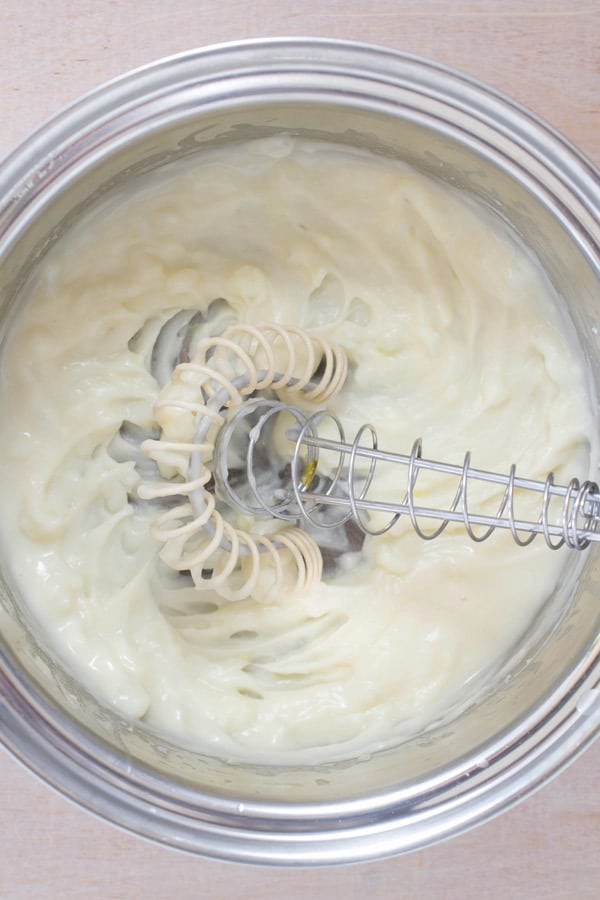 8. Season the sauce with salt and pepper to your taste.

9. Add ½ cup of Monterey Jack cheese and the green chilies. 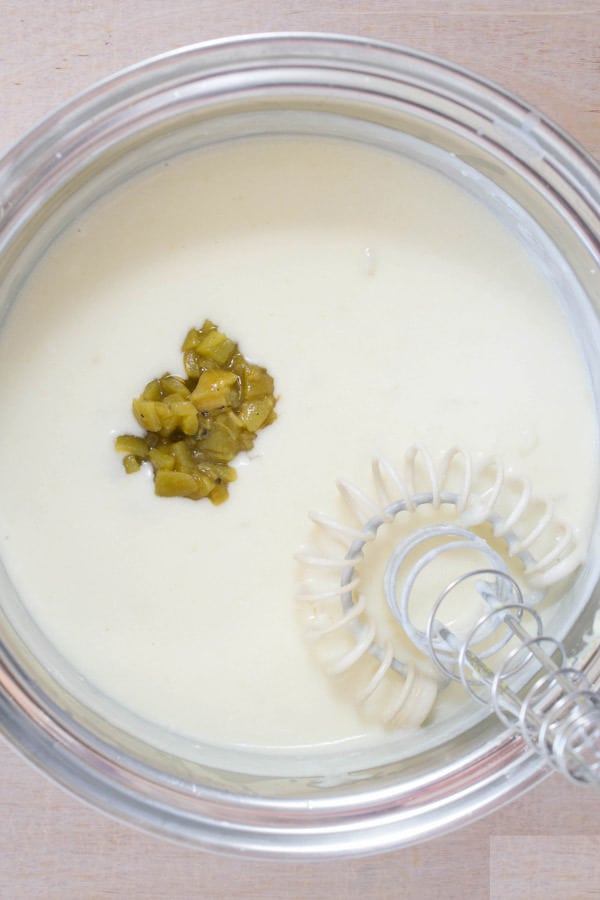 How to Assemble Sour Cream Enchiladas 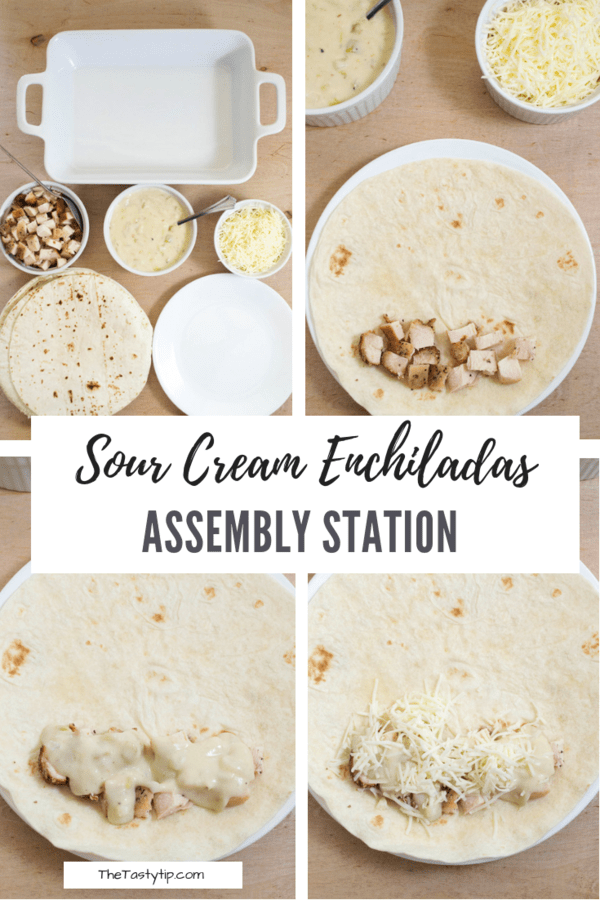 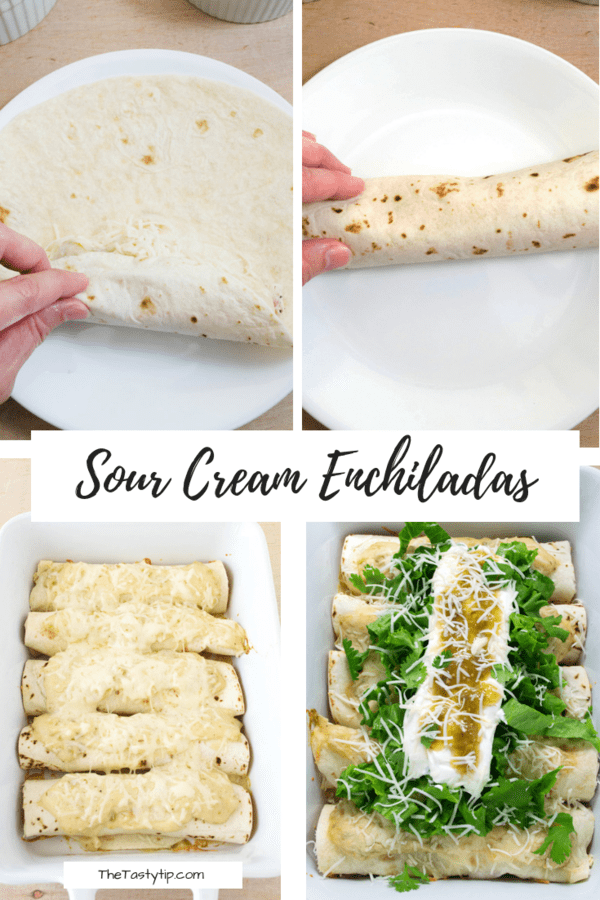 5. Spoon the remaining sauce over the enchiladas in the pan.  Top with shredded cheese.

6. Bake in the oven at 375° Fahrenheit for 25-30 minutes.  These easy sour cream enchiladas are finished when the cheese and sour cream sauce are bubbling.

7. Remove the pan from the oven and cool for 5 minutes before serving.

8. As you dish the enchiladas onto a plate, garnish with guacamole, salsa, green onions, and roasted corn.