Full-flavored split pea soup with ham bone is hearty, nutritious, and easy to whip up in a pressure cooker.  The pressure cooker releases the flavor and nutrition from the ham bone to create a crave-worthy soup to satisfy your appetite.

I recently discovered the incredible flavor that a ham bone can bring to soup.  I have always made split pea soup with ham added.  My family loves that soup.

However, during this unique time in 2020 (where we were all encouraged to stay home), I became more cautious about wasting anything.  It was not always easy to find what we needed at the store, so I hesitated to throw out anything that had any use left.

This extended to the ham we ate for Easter while we stayed at home in 2020.  I decided to use every bit of the ham — including the ham bone.

It is funny how we get impressions about food.  Growing up in a large family with a small income, beans and legumes of all types composed our diet.  Split pea soup was one common meal we ate.  We never bought ham, so the soup was a vegan split pea soup.

Since we didn’t have much growing up, I associated split pea soup with poverty.  Funny, yes?  It is cheap, substantial, and full of protein and fiber.  The most bang for your buck, made with inexpensive ingredients that cheaply filled bellies.

This childhood impression continued as I read one of the best books of all time, The Book Thief, by Marcus Zusak.  The fictional story revolves around a young girl living in Germany during World War II.

Sprinkled throughout the book are references to the pea soup meals she ate every day.  Mama Hubermann cooked a large pot of pea soup on Sunday. She cooked enough soup to last all week, until she made her next pot the following Sunday.  Everyone ate it and didn’t complain.  I’m sure finding ham in pea soup was rare during this time.

In spite of the naive impressions of my youth, age and wisdom has opened my eyes.  Split pea soup may be affordable to make, but the benefits do not stop there.

The ingredients in split pea soup are incredibly healthy.  They fill you up and provide protein and fiber.  But more importantly, a recipe for split pea soup with a ham bone produces a decadent mouthwatering soup.  Even if I had unlimited resources, I would still seek it out.  Yes, it is that amazing.

What is it about that Ham Bone?

When a ham bone simmers in broth, it releases the deep savory notes of ham into the soup.  As the bone cooks in liquid, all the little bits of ham attached to the bone soften and begin to come off into the soup.  No wasting a spec of ham.

As every bit of flavor is teased out of the ham bone, the soup takes on a rich meaty flavor.  This flavor combines with the split peas, potatoes, and carrots to create an incredible luxurious taste.

Adding meat to the soup doesn’t give the same intensity of flavor as simmering the ham bone in the soup.  Not by a long shot.

Is Split Pea Soup With Ham Bone Good For You

Split pea soup is incredibly healthy.  Take a look at the ingredients.

Split Peas: Split peas are the main ingredient, the star of the show. Split peas are peas, which have been removed from their pod. Then they are dried, peeled, and split.

Split peas are low in fat and high in fiber and potassium, iron, B vitamins, and magnesium.  You can’t go wrong with split peas.

Ham Bone: When a ham bone cooks in broth, the bone proteins start to break down into peptides.  Remember learning about peptides in high school biology? Peptides are made of short-chain amino acids.  Some of the amino acids that compose peptides help strengthen the body’s cardiovascular system.

Amazing!  And all from a ham bone broth.  So …. Never throw out that ham bone.  Make split pea soup with the ham bone or use it to make any other soup.  Your heart will thank you for it.

Potatoes: Potatoes have potassium, fiber, calcium, iron, and zinc.  They have no cholesterol and low calories, yet are very filling.

Vegetables: Carrots, celery, and onions are the main vegetables in split pea soup.  These three vegetables make the flavor base in many soups.

The flavor combination of carrots, celery, and onion balance the taste of split peas.

As a bonus, Better than Bouillon also contains less salt than other bouillons or broths.  Add 1 teaspoon vegetable base for every cup of water. Whisk together until combined.

Alternately, you can use your favorite pre-made vegetable or chicken broth.

Dried herbs are a better choice to use in a soup since the flavor of fresh herbs diminish as they cook.

Dried herbs also save time since you don’t have to mince anything. Just make sure that when you open your herb container and take a sniff, you can smell the aroma of the herb. Otherwise, the herbs are too stale to use.

Add salt and pepper at the end of cooking time to adjust the taste.

Salt is a little tricky in split pea soup with ham.  The salt content of broths vary widely. In addition, ham is a salty meat.  I recommend adding 1 teaspoon of salt to the soup as it cooks.

When the soup is finished cooking, taste it and add additional salt if necessary.

Do spit peas need to be soaked?

I recommend soaking split peas for a quicker cooking time. Soaking them also reduces gastrointestinal symptoms that some people experience.

What happens if you don’t rinse split peas?

Your split peas will take a few minutes longer to cook if you don’t rinse them. Some people also experience gastrointestinal symptoms, such as bloating or gas.

Some people do experience gastrointestinal symptoms when they eat split peas.  However, split peas may cause less gas than other types of beans.

Not everyone experiences these symptoms.  But if you do, be sure to soak the split peas before cooking and throw out the soak water to help reduce any discomfort.

How do you thicken split pea soup?

Blending some of the split peas and returning the blended peas to the soup will help thicken it.

Cooling it will also thicken it.

Will pea soup thicken as it cools?

Pea soup will thicken as it cools.

How long does split pea soup last in the fridge?

Split pea soup lasts 2 to 3 days in the fridge. When you reheat it, you may need to add additional water or broth since the soup will thicken as it cools.

Adding a ham bone to the split pea soup recipe was so tasty, I am now a ham bone broth gal.  If I need a ham for any holiday meal, I always buy a ham with the bone in.  The flavor it brings to split pea soup is beyond incredible.  Try it and see if you agree.

Total time does not include overnight soak time for the split peas. 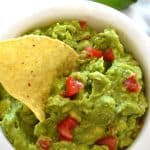