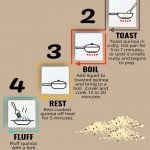 Learn how to cook quinoa to fluffy perfection with a few simple steps. Use this protein-packed nutritional powerhouse in a wide variety of recipes.

Where did quinoa come from? In the past decade, quinoa has created a buzz in the health and culinary world. You know what I mean.

In addition, NASA scientists have experimented with quinoa for long space flights. And the United Nations highlights its potential to alleviate global hunger.

It has many champions, and for good reasons. I recommend eating it regularly, which is why learning how to cook quinoa is important.

If you are on the lookout for the best ways to cook staple foods, this post is for you. You can also read how to cook black beans and how to cook brown rice for more information on the best way to cook these whole foods.

After you have cooked your first batch of quinoa, you can use it in both sweet and savory dishes.

Quinoa (commonly pronounced “keen-wah”) tastes like a mild and slightly nutty grain with more chew than you would expect for such tiny seeds.

Yes, quinoa is a wheat-free seed, not a grain. More accurately, it is a pseudocereal or pseudograin because it is derived from a seed plant. In contrast, wheat and oats come from grasses.

Uncooked quinoa seed has a natural coating containing bitter saponins. If your quinoa tastes bitter, the saponin coating is still there.

Most quinoa commercial producers in the United States pre-wash it to remove this coating. Your quinoa package should be labeled pre-washed if it has been.

However, if you taste bitterness, remove the saponins and bitterness yourself.

It is easy to do. Simply rinse quinoa with water in a fine-mesh strainer until the water runs clear. Then cook, sprout, or grind the quinoa into flour.

Quinoa cooks by absorption. This means that the seed absorbs the water as it cooks and becomes fluffy.

Most Popular Types of Quinoa

You can find quinoa in various colors, including white, red, and black quinoa. Are there any differences in the varieties of quinoa other than the color?

All cooked quinoa is gluten-free and rich in vitamins, minerals, fiber, and protein. However, there are slight differences in the flavor and cooking time for the variety of colors of quinoa.

Most grocery stores sell white quinoa. Many also sell red quinoa or rainbow quinoa, which is a mix of the three colors. Black quinoa can be harder to find.

Many elements influence the quality of cooked quinoa. Factors ranging from the type of pan used to the ratio of quinoa to water can impact the end result.

Listed below are some of the most crucial components that determine the outcome of your cooked quinoa.

How to Cook Quinoa on the Stove

I like my quinoa grains nutty, fluffy, yet distinct with a bit of chew. To achieve this taste and texture, follow these steps.

How to Make Instant Pot Quinoa

It is a good idea to cook raw quinoa in a pressure cooker. It is one of my favorite ways to prepare it.

It is truly the only foolproof way to prepare quinoa because the cooking environment is controlled.

It is easy to batch cook quinoa as part of your weekly meal prep. Or to double the recipe for a lot of people coming to dinner.

How to Cook Quinoa in a Rice Cooker

You can get perfect quinoa in a rice cooker. And it is easy to do.

How do you pronounce quinoa?

In the United States, Quinoa is commonly pronounced “keen-wah.”

How do you make quinoa taste good?

Make quinoa taste good by toasting it and cooking it in vegetable or chicken broth. Season with herbs, spices, or other flavorings. Don’t forget to salt it too.

How do you cook 2 cups of quinoa?

About ⅔ cup of dry quinoa cooked in 1⅓ cup of cooking liquid will yield 2 cups of cooked quinoa.

Cook in the Instant Pot for 1 minute. Allow it to depressurize naturally. Fluff and serve.

Why does some quinoa taste bitter?

Quinoa seeds naturally have saponins in their coating. Saponins taste bitter and, as a result, deter birds from snacking on them.

Can you eat quinoa raw?

Typically, quinoa is eaten cooked or ground into flour before being cooked or baked. However, you can also sprout quinoa and eat it raw.

How to Store Cooked Quinoa

After the quinoa is cooked, allow it to cool completely. Place the cooled quinoa in an airtight container and store it in the refrigerator.

Can you Freeze Quinoa?

The best part about making quinoa is making a large batch and then freezing half.

Can You Reheat Quinoa?

It is safe to reheat quinoa. There are several ways to reheat it.

Nearly everyone enthusiastically recommends quinoa. There are lots of health benefits of quinoa. Check out these characteristics of cooked quinoa:

Some of the best quinoa recipes are simple. Nothing wrong with that. It makes a tasty breakfast protein bowl, a healthy salad lunch, and a delicious casserole dinner.

What is your favorite way to eat quinoa? Comment below and let me know.

The History of Quinoa

Ancient South Americans grew quinoa over 5,000 years ago. Although originally fed to livestock, the Incan people cultivated it for human consumption about 3,000 years ago.

It originated in the Andes Mountains regions in Peru and Bolivia, and most of the agriculture production is still there.

The ancient Incan people of South America believed quinoa was sacred. It was an important food source and was sustainable. They referred to it reverently as “The Mother Grain”.

Alexander Von Humboldt (a Latin American geographer) said that quinoa was to the Incan people what “wine was to the Greeks, wheat to the Romans, cotton to the Arabs”.

So, how did an ancient grain become so popular in the United States?

In 1993, NASA commissioned a study on the use of quinoa as a suitable food for long-term space missions. Scientists selected it as an experimental crop for NASA’s Controlled Ecological Life Support System.

NASA liked quinoa because it had high protein, contained all the essential amino acids, was versatile and easy to use, and it was promising when grown hydroponically in a greenhouse.

NASA got the world’s attention.

The United Nations Food and Agricultural Organization called quinoa a “super crop” because of its nutritional value, its storage ability, and its potential to resolve food shortages and global hunger.

The United Nations General Assembly declared 2013 the International Year of Quinoa, hoping to draw attention to all of quinoa’s benefits.

The attention worked. Quinoa has become so popular in the United States in the last 10 years that it has tripled in price since 2006 because of the high demand.